His Divine Grace A.C. Bhaktivedanta Swami Prabhupada came to New York in 1965 and in twelve short years made the chanting of ‘Hare Krishna’ known throughout the world. He started a spiritual revolution wherein devotion, simplicity and compassion became the direction for living. Coming from a lineage of self-realised teachers, Srila Prabhupada gave a fearless exposition of devotional wisdom which had been kept locked within India for centuries.

Srila Prabhupada was an authorised spiritual teacher in an unbroken succession that can be traced back to God Himself – and his appearance was predicted. Sages in this line have learned and taught the pure wisdom of God’s original instructions for millennia, and include Vyasa, the author of the sacred scriptures, and Chaitanya, the propagator of the holy names of the Lord.

Acting on the platform of his spiritual identity, Srila Prabhupada completely dedicated his life to serve God. He was able to produce phenomenal accomplishments and transform the consciousness of people only because he was on the highest state of self-realisation and therefore divinely empowered. Such self-realised souls in the world are very rare.

Srila Prabhupada had selfless concern for the welfare of all living beings. He wanted to relieve our suffering, but explained that compassion for the material body alone does not provide a lasting solution. He saw suffering as a symptom of a deeper problem: our misidentification with the temporary material body. He enlightened us about our real identity: the soul.

Srila Prabhupada was not just a teacher, but also a teacher of teachers for the modern age. He translated more than 70 Vedic books into English and was honoured by many leading scholars. He taught and led by example, embodying the knowledge that he conveyed. He is recognised as ‘Prabhupada’ – one at whose feet the other masters sit.

Srila Prabhupada was named Abhay Charan at birth, which means ‘one who is fearless having taken shelter at the feet of God’. The significance of this name was revealed in his bold mission with unflinching trust in God, despite great personal hardship. He explained that fear is due to a lack of understanding of the illusory nature of the material world.

Srila Prabhupada created a worldwide spiritual and cultural revolution that encouraged many people to seriously take to the process of god consciousness. He started this revolution in New York, because he felt that America was where he would find intelligent young people that would be receptive to the timeless, authoritative spiritual instruction of the Vedic scriptures.

Humble, meek, truthful and pure – in his character, in his lifestyle and in the message he taught. Srila Prabhupada lived to serve mankind and inspired others to follow ‘simple living, high thinking’, a return to an uncomplicated lifestyle. Despite the success of his movement, Srila Prabhupada always remained modest and detached and gave credit to others. 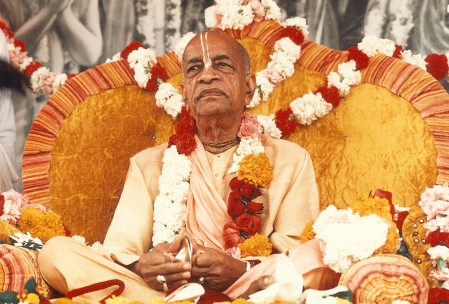 Srila Prabhupada introduced to the West the greatest sound for this age – a spiritual sound vibration called the Maha-mantra:
Hare Krishna Hare Krishna, Krishna Krishna Hare Hare, Hare Rama Hare Rama, Rama Rama Hare Hare
The chanting of these holy names is a means to liberate the soul from the material world.

Srila Prabhupada epitomised and taught bhakti yoga: pure, absolute and unconditional love of the Supreme Lord. Giving up household life and adopting the renounced order, he became a travelling monk whose affection and compassion now extended to the whole of society. He circled the globe twelve times, spreading the message of pure devotion everywhere.

You can find more here http://www.prabhupada.net/